I really enjoyed As Organism and am glad we were tasked to review this project. It wasn’t the typical fictional story format project we usually get asked to review. This project was an information science based project in the vein of almost anything Neil Degrase Tyson does these days or insert your favorite science show here. 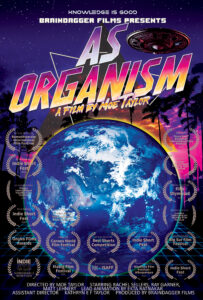 Just as the universe is difficult to wrap your head around the shear scale of it, I often feel like there are so many projects out there and that most of them are just retreads of stories, but apparently new takes on concepts are still out there to be found, and that is nice to know. To me this project was about the concept of everything macro needs the micro to exist just as much as the micro needs the macro to exist. Whether or not that’s the correct summation of what producer, director, writer Moe Taylor was going for, that’s what I came away with and think it’s a fascinating concept to ponder and expand on.

“There is more non-human about you than what is actually human”, explains evolutionary biologist Matt Lehnart during his interview. The entire time in my notes as I watched this project I kept typing down quotes from Allan Watts, M. Lehnart and Ray Garner that concisely expanded on the concept in a way that was very easy to comprehend. Quotes that were just fascinating to think about. It got to the point that I literally was going to start typing down another quote and basically the last five minutes of the project went by and I just gave up cause it all was memorable. By the time Garner states, “You are stardust” I was already hooked.

Anyways, instead of me trying to continue summarizing this project and running the risk of sounding like an idiot in doing so, I’m just gonna say, if you get a chance to check out As Organism I highly recommend it.

No complaints at all with As Organism on the technical side. From the narration voice over of Racheal Sellers, to the interview segments with Lehnart and Garner, and the archive audio of Allan Watts this project was spot on. The edit was great. Even the way they broke up the half hour project into segments with the use of inserting a countdown clock on the turns to inform you that there was only 25 more minutes, 18 more minutes and so on. Because there was so much information, this technique trained your brain into saying “you got this, keep processing the information cause you’ll get to rest in a little bit”.

Anyways great job on the project and I am glad it looks like As Organism is being recognized for the quality project that it is.